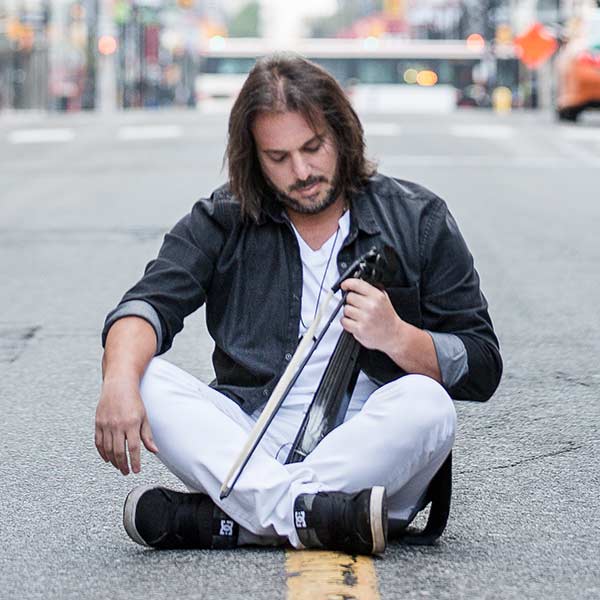 Lazos Ioannidis was born on 13/07/74 from immigrant parents, in Stuttgart, Germany.  He grew up and lived in a greek village in Serres called “Lefkonas”.  From his childhood he had appealed to the music and especially, because of his origin, to the pontic music.  So, at the age of 14, he starts his involvement with the pontic lyra and at the same time he begins his studies at the Conservatory of Serres.

In 1996 until 1999, he acquires his two degrees in music studies.  That was the year that he and his brother George began their professional music career.  His discography includes 3 cds with his own compositions at which, he ‘s the key performer. He has also participated in many collegeues’ productions, either as a composer, arranger or as a performer.

Since 2002, after a journey from the Balkans to Asia, an idea of a music production, with the pontian lyra starring, came up.  He thought of a production made by a mixture of different music ideas and different music cultures.  After 6 years of study and research, in 2008 this music production was finally completed.  It was released in 2009 in Greece and also abroad by Friends Music Factory.

In May 2010, he participated as the lyra player at the Greek delegation with George Alkaios in the Eurovision Contest in Oslo.  In September 2010, the first world premiere of this musical show “A lyra for all the people” took place in Gis Theatre in Thessaloniki, in front of 4500 people.  A musical, dance show constituted from 28 musicians from Greece and abroad.

His collaboration with Omar Faruk Tekbilek and the appearances in the Concert Hall of Thessaloniki and Athens, performing his own compositions for Pontic Lyra, are the landmark moments so far in his artistic path.

In 2015 Lazo began a collaboration with guitarist Pavlo while filming the DVD, “Live in Kastoria” in his home town of Kastoria, Greece. By the end of 2016, Lazo had now been introduced to over 10, 000 North American spectators in cities such as Toronto, Montreal, New York, Ohio and Los Angeles.

2017 marked his first North American CD release titled, “LAZO“. The album is produced by Pavlo featuring original music and described as,  “AN ANCIENT SOUND FOR A NEW WORLD“.

Currently Lazos Ioannidis lives in Toronto, Canada with his family, alongside his career as an artist offering music lessons for the Lyra while popularizing it’s distinctive timbre and musical history.